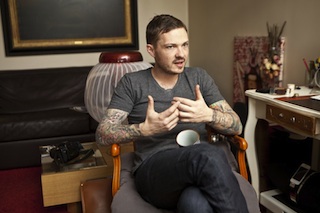 Jeremy is a fervent enthusiast and has devoted his life to his passion for blown glass.

It was when he walked into a workshop in the United States quite by chance at the age of nineteen and saw the work with hot glass that he simply “fell in love”.

When he was very young, he had sensitivity for the arts and crafts; he lived in Africa, his parents had a keen interest in art and took him to all the markets. He knew from a very early age that he wanted to work with his hands but his life was to abruptly change when he lost both his parents around the age of fourteen, was adopted by his aunt and returned to France where he endeavored to adapt. After graduating from high school in France, he left for the United States where he did a lot of small jobs before discovering what he wanted to do. He had to overcome another ordeal, a serious accident immobilized him for several months. During his long, trying convalescence, glass became an obsession. He found in it the will to live after all his sufferings and wanderings.

On the strength of this certainty, he spent time at a number of glassblowing workshops in California in San Francisco and in Florida then in Murano in Davide Salvadore’s studio.

Armed with his skills, a freehand glassblower, he decided to come home to France where he wanted to change the image of glass, but without any equity, it is not easy to set up. He did various small jobs to save up money. After a year, an opportunity arose: a workshop reopened in Nancy and Jeremy went there straightaway. He started to produce again and met interesting people like Antoine Brodin who still works with him today.

Jeremy Maxwell Wintrebert is an artist, a craftsman, a designer who wants to build something in France: a workshop which would be a place of exchange to train young people and receive people from different horizons. His exceptional, unique works are executed freehand with no molds, no tools. It is the work of gravity, the combination of the gestures of all his team and of heating in a furnace. I hope you will like his work as much as I do and that he will be able to make his dreams come true.