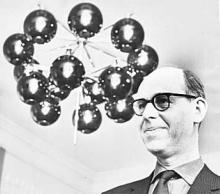 Born in Hvadhem on the island of Gotland in 1919, Hans-Agne Jakobsson finished his apprenticeship as a carpenter before going on to study architecture in Gothenburg. He began his career as an industrial designer at General Motors and then became an assistant to Carl Malmsten, one of the most prominent figures in Swedish design. In 1951, after founding his own company Hans-Agne Jakobsson AB in Markaryd, he began to create original decorative lighting. Like a lot of Scandinavian designers, he was largely influenced by his native land: the lakes of southern Sweden and its deep dark woods fired his imagination. He liked soft lighting and always sought to avoid glaring light bulbs. Hans-Agne Jakobsson experimented with iron, brass, glass, leather and fabric, mixing materials and techniques. His creations are genuinely novel and innovative due to their design and aesthetics. They can be found in both private homes and public buildings.